—using computer science to increase (the edge of) human understanding

Can you tell us a little about your overall experience of being on the TEDxOdense stage last year?

On the day, you wake up and you’re really nervous. Fortunately my talk was early in the day, I was the second speaker, so I didn’t have to wait an entire day before going on stage. I was really happy about that! Usually I start talking insanely fast when I get nervous. To make sure I started the talk in a normal pace, I planned to go on stage and pause for a few seconds before starting the talk. When I finally got up there, I thought: “okay, remember you need to wait a few seconds, wow they’re all looking at me, this feels like I’ve already waited an entire hour… ok, wait a bit more.. ok, probably start now. ” It felt like I waited hours, but when I watched the movie afterwards I barely waited a second.

What do you remember most about the day?

I really liked sitting backstage, talking with all the speakers, it was nice to get a glimpse into the worlds of so many different brilliant people. They had very different outlooks on everything. There were artists, scientists, and magicians, with quite different perspectives on everything. Sometimes when people with big differences interact (e.g. on Facebook), you see people being really mean and angry with each other. But at TEDxOdense everyone was open and also willing to listen to other people’s perspectives. This takes conscious effort, but it was my experience that everyone was willing to put in the effort. I imagine everyone had anticipated the day for a long time, so people had a bit more willpower to try and take other people’s perspective.

What did you learn from standing on the stage?

From the entire process, I learned mostly about writing. Making nice analogies and listening to Adam [Montandon, TEDxOdense speaker coach] when he says, “it’s too complicated, simplify it” or “get rid of these jokes, they’re dad jokes, you already hit your dad joke quota!”. I mostly learned from the preparation, whereas standing on the stage is a very brief experience. That said, standing on the stage was an amazing 15 minutes of adrenaline.

So what about the process, what did you take from that?

Most of what I do is mathematics where I have a clean-cut answer. Preparing a talk is a lot about communication, and, compared to what I normally do, more artistic, and I tried tackling it by using storytelling. It seemed like a good approach to try a lot of ideas and fail really fast. Doing that with other people worked really well. In that sense I learned a lot about communicating my thoughts clearly. It’s also one of the reasons I wanted to do it. I’ve been teaching a lot, but it’s different when you have bachelor students in computer science who speak the same language as you, so to say. It is more challenging if you have to speak to people outside the field.

How was the experience, standing on the red dot on the stage?

It was amazing, I loved it. It’s kind of like a bungee jump, I guess. I haven’t actually tried bungee jumping, but that’s how I imagine it. It was this crazy adrenaline high. It also found it very interesting to observe how my body responded to the stress of talking in front of so many people.
On an intelligent level you can understand that obviously talking in front of people isn’t dangerous. Even if there’s several hundred people in front of you, I mean, it’s not like they will take spears out of their handbags and try to kill you. Nevertheless, that’s typically how you feel if you talk in front of a lot of people, your body tells you “oh man, we’re really going to die right now.” Going on the stage, I knew my body would start out by responding in this fear response, and that it wasn’t rational, so it was very interesting to observe this response and try to manage it. Practice really helped me here.'

How did you practice then?

There were two parts of the process: writing the story and practicing telling the story.
In terms of writing the story, I would try to explain the ideas to a lot of different friends; if they didn’t instantly understand something, I’d deem it too difficult and try to simplify it. In terms of practicing story telling, I would do two things. I started by filming myself telling the story so I could rewatch and see what worked and what didn’t. A lot of people don’t like filming themselves. I think it’s really good practice and I think people should try it regardless of how they feel. It’s a really good tool for self evaluation. If you’re not used to it though, it can be tough because you’ll see all the mistakes very clearly. But that’s exactly why I believe it is helpful!

This year’s theme is the Edge of Brilliance, have you ever felt on the edge?

When you’re doing research and you think you’ve solved this problem you think is important—other people might disagree with you— there’s this amazing feeling of adrenaline and purpose. I guess this could be described as being on the edge, in some sense you are trying to increase the edge of human understanding. If people have the opportunity to go into research and get that feeling, I would strongly advise it, it’s amazing. It’s like standing on the edge of a cliff and looking down and saying, “oh shit,” but in a nice way—with a nice view. 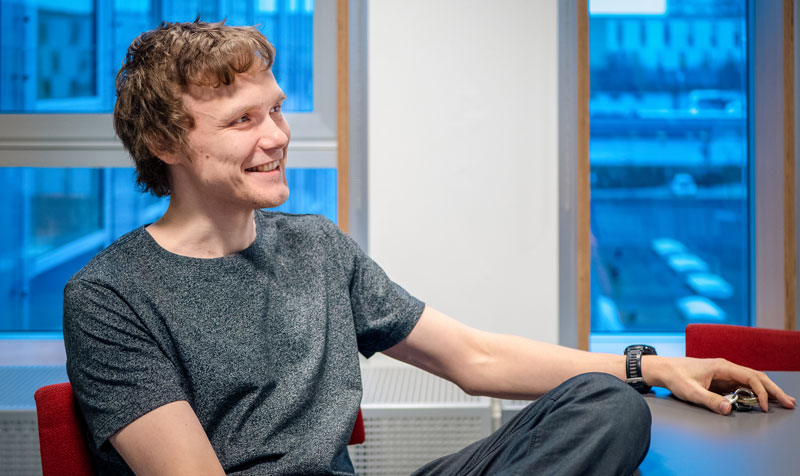 Since TEDxOdense heard from you last, what’s happened? Have you cheated on any more exams?

Haha! I just want to make it clear, every single detail of the story was made up, I did not cheat. Originally I actually said that in the story, but Adam convinced me that the story would be more life-like if I told the story as if I actually cheated.
And apparently that worked. After the talk this one guy came up to me and said, “I’m just so happy that you came forth and said this! I mean, I have been feeling so bad my entire life because I cheated on this exam, and everyone cheats right? So I’m so happy that you’re coming forth!”
Still high on adrenaline after the talk, I had no clue what to answer him, he’d probably feel really bad if I told him that it was all made up, so I decided against it.

So what has actually happened since, what’s happened with your life?

Well, I’ve been doing a lot of research. I’ve been working a lot on trying to formulate research ideas better, it’s a bit different from what we did at TEDxOdense, but trying to communicate your research ideas to fellow researchers seems to be very important. I think I’ve improved a fair bit on that account. I might’ve been inspired a bit by the TEDx experience. It’s not like you need these cute analogies, but still thinking about your ideas and what you actually want to do and trying to put it into simple terms is a really important skill to have. I’ve been working a lot on that, which has also caused a lot of collaboration, I think that’s really important in research.

Do you have anything exciting planned?

We have two papers up for review right now. One of them we actually based the TEDx talk on, I just didn’t get to cover all of it, so it’s going to be interesting to see if the reviewers are merciful. There’s also a lot happening in this area [machine learning] right now. I think Facebook knows I do machine learning, so they show me all these recent results. That’s happening a lot, it’s completely insane to see these self-driving cars that are getting really good, it’s quite impressive. There’s another area that’s actually quite frightening. If I say something like, “global warming is bad,” they could put a politician’s face on [mine] and animate it, any politician they want, and change the voice afterwards too. A whole new era of fake news, it would be quite frightening. And so some are trying to develop ways to then detect this kind of fraud, which seems like an interesting problem to work on. So if anyone wants a job in computer science, there’s a lot of funding and a lot of problems to solve.

Do you have any great advice for upcoming speakers this year?

Yeah. Enjoy it. If I have to give real advice, I would say, tape yourself, say it to a camera, look at yourself, at your facial expressions, and find all the mistakes and fix them. Then do that 10, 20 times, you’re probably going to be good.

Do you have any advice for the audience members?

I think bringing an open mind is important because there are very different people coming from very different backgrounds. Some of the people you’re probably going to disagree with, but I think that might actually be the most interesting part—turning up and seeing who you disagree with and then you can maybe talk with them afterward. I remember I had a lot of really cool discussions with some of the speakers that I initially thought I would disagree with. But there are a lot of smart people there and they have a lot of good arguments, it’s amazing to be proven wrong.