—bringing (the edges of) people and culture closer together

Can you tell us a little bit about your overall experience of being at TEDxOdense last year?

I think it was really fun being at TEDxOdense, because there were so many other interesting speakers around. You know, we speakers tend to hang out with speakers that cover the same topics we do. I know a lot of speakers who work with cultural topics, for example. So it was fun to be exposed to a different group of speakers than I would ordinarily work with.

What do you remember best about the day?

I remember being backstage and everybody was congratulating each other and watching each other’s speeches on the TV in the backstage room. We were inspired by each other, that was very positive.

So it was an overall positive atmosphere?

Yeah, I think it was! There wasn’t a lot of rivalry, because we were all talking about different things, so it wasn’t like “you got more applause.” We weren’t really competitors, since our fields are so different.

What do you think you learned, or took with you, from standing on the red dot?

For me, one of the most challenging things about TEDx was that you’re without notes and it’s a speech you deliver for the first time and for the only time. When you’re a professional speaker you have a few set speeches, and of course you adapt them for each audience, but there is a set of points you give again and again. So the challenge at TEDx was remembering all this new material without notes. Adam [Montandon, TEDxOdense speaker coach], explained the method of loci for memorization, and I used that. The truth is, you may forget a couple of things, but the audience doesn’t know there’s anything missing, so you just keep going and pretend it’s exactly the way it’s supposed to be. I think I learned a lot about spontaneity.

What do you hope the audience took from your talk, or learned from it?

My talk was about being a newcomer in a country and how you need to take a positive approach to it. And that there are differences, but you need to figure out how you fit with the country and focus on those things, as opposed to the ways that you are different from the new country or the new culture. You also need to, for your own purposes, decide how much you’re going to integrate. “Okay, I am going to do this and this, but these things over here just aren’t for me,” and that’s okay.

What do you think would be something that would be hard for people to adjust to in Denmark?

Well for me, the drinking culture is really hard. I’ll have a glass of wine, but I don’t like to get drunk, that’s just not me. But getting very drunk is a part of social life here, and some Danes take it personally if you don’t want to get drunk with them. So I think that’s very hard for newcomers, even those of us who do drink alcohol. People who don’t have alcohol in their lives for whatever reason, that’s a really big thing to get over.

What do you think you took from the process leading up to—you said a lot about the preparation and remembering the speech.

Yeah, I enjoyed working with Adam and Kimberly [Bent, TEDxOdense speaker coordinator], because usually as a professional speaker you don’t have a lot of people to toss ideas around with and give feedback. You just do your best and then you react with the audience. But to prepare with somebody else who has a background in public speaking was really valuable for me. 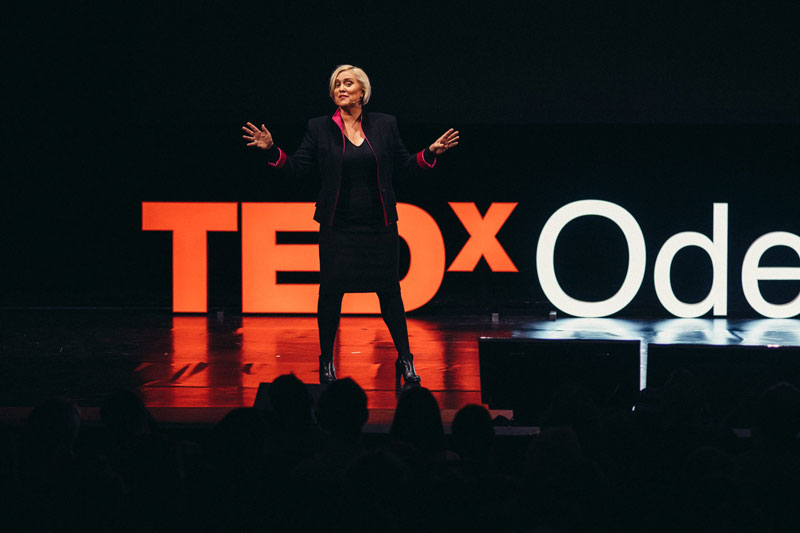 Last year’s theme was My Other Side, how do you think that fit you?

That’s very introspective. Do you think people generally do that when they’re in two cultures?

You know what, I think their first instinct is to complain. “Why don’t they do it like this? It would be so much better if they did it like that!” What my speech was about was taking a step back and figuring out what’s important to the other culture. If you are moving to a new place voluntarily—which most people other than refugees are—moving for work, or school,  or for love, you need to choose a place where you can be in line with the local culture’s values. There are some places in the world that are not in line with my values. I wouldn’t be comfortable there, so it would be a poor choice on my part to move to those places. The point to my speech is: choose a place where you can fit in, where you can adapt enough to the local values to be able to contribute to the local society and not just complain all the time.

Since TEDxOdense last year, what have you been up to?

I’ve given about 50 speeches all over Denmark over the past year. I love to travel, even to the small towns of Denmark, I think it’s really fun. I met a lot of people, which I really like because it all feeds back into my work. If last week I met a guy and he told me a good story, then it goes into the next speech. I’ve also been to Portugal, Sweden, I’ve talked about going to Korea with my speeches, Germany. I’d like to get into the US speaker market: I haven’t done that yet. In the US there’s a lot of talk about “hygge” and that sort of thing, so I think there is a market there. A lot of Americans have skewed views of Denmark—they either think Denmark is a socialist utopia or a socialist hellhole. So I would like to do it, but it’s a big project.

So what’s up next for you?

I’ll be publishing a book oft tips for Danes working with Americans and tips for Americans working with Danes. That will hopefully be out this summer. I am writing a column for BT about voting in my first national election in Denmark—I have no idea who I am going to vote for. And I’m still available for speeches! I’ll be at a street festival in Vejle Friday afternoon June 7th. I’ll be doing a “How to Live in Denmark” gameshow there, it’ll be really fun. We do game show games based on Danish culture. For example, we do a version of Jeopardy and the categories are riffs on life in contemporary Denmark, like “Fun with SKAT”. It’s popular with Danes too: Danes are so good at having a sense of humor about themselves. I would not have a career if they didn’t.

It takes a bit of humorous distance to be able to laugh at yourself and your home country and culture, or what do you think?

Do you have any great advice for the speakers this year?

Well, it’s a speech of a lifetime because you’re only going to do it once and it’s recorded, then it’s visible all over the world. For the rest of your career people will  be referring back to it, so you have to prepare well and carefully choose the way you present yourself. Double-check your outfit—take photos and make sure you like what you’re wearing! Personally, I picked the wrong shoes. When other people see the video of the speech, they can evaluate the points I’m making, agree or disagree. But all I see are the shoes.

Is there anything you’d like to add or mention?

TEDx Odense was a great experience! The audience was so receptive and supportive.  People stopped me in the street in Odense to say they had seen my speech. Even on the day of the event, audience members approached me afterwards to say it had been helpful to them. That’s my goal, to be of service to people. So part of it was the audience, and the other part was meeting the speakers, people I would not have had a chance to meet otherwise, and I learned a lot from them.