—sitting by those facing (the edge of) life and death

Can you tell us a little about your overall experience at TEDxOdense last year?

Personally, it was a huge experience. At first I thought, what on Earth am I going to do here? But then I was so greatly assured by Adam [Montandon, TEDxOdense speaker coach], that he would help, and he did. The guidance he came up with was inevitably right, so there was no cause for any concern on my behalf.

How were you recruited to give your TED talk?

Well, TEDxOdense connected with a group called Ældre Sagen, and they have a service called Final Companion, for which I have been volunteering. The speaker recruitment team was interested in what that was all about. I didn’t even know of TED at the time, so I looked it up. It’s all about ideas that the world ought to know about, and I thought, “well how could I go wrong with that?”, so I said yes. The next thing I knew, Adam called and we talked for hours on the phone. That’s how it happened.

What do you remember best about the day of the event?

Oh boy. The dinner afterwards was simply great, because I had six friends with me, that are the closest I have. They showed up, they wanted to be there, that was grand. And I have to say the standing ovation was unbelievable. I have never experienced that, a standing ovation for anything like that. 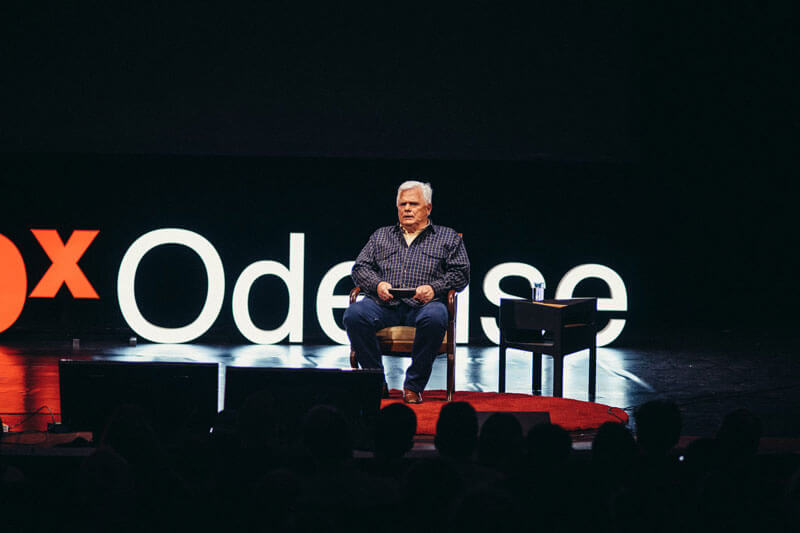 I know you are retired now, but what were you doing until you retired, since there were no standing ovations there?

Oooh, which decade do you want me to talk about? Ha! Well, I ended up in home healthcare and nursing.

I take it you don’t get standing ovations in home healthcare?

No you don’t. It’s a different kind of satisfaction you get out of that. It’s very quiet, it’s very inward, it’s all your own because no one says anything. And so, at first with TEDxOdense, I was wondering, how on earth are they going to put me in the speaker lineup with the rest of them? Because mine was so unlike all the rest of the talks. They were illustrative when explaining what their talk was about, whereas mine was very—there were no jesters there. It was all, in every sentence, in every comma, and every intentionally felt emotion.

But then Adam thought to use Kajsa [Vala, TEDxOdense 2018 performer] to finish off my talk and I thought she was brilliant. I was touched, and I’d never heard of her or met her until the night before we went on stage. But whether it was she, or me, or us getting the standing ovation makes no difference, because she really deserved it.

I also thought it was very symbolic that you were the only speaker sitting down, because your talk was about sitting beside dying people. I thought that was really beautiful.

That was the whole idea, there were no gestures. It was pretty intense, also because death is a subject that people don’t like to get anywhere near. There’s a lot of taboo there. Plus, all my own personal illnesses and what has come with it, thoughts of death and dying, the only thing to do was sit down. 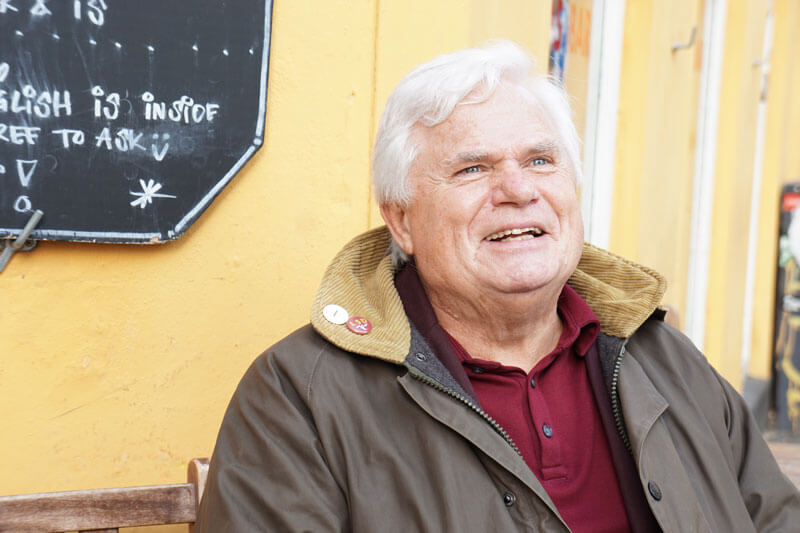 I can mostly deduct what they took from it, from the ovation I got once we left the stage. What happened when I came out—I didn’t get run over, but I have never experienced people coming to me in such masses grabbing me, and asking me, and encouraging me, and thanking me. It was fantastic and it went on and on and on. Another thing I remember clearly from the evening, was sitting up on the balcony among the audience. Suddenly, this woman comes over to me and says, “I’m going to give you a hug.” And I said, “truly?” And she said, “just for the subject that you have chosen, I want to hug you.” So I got this huge hug from this total stranger. I was a little dumbfounded and she just turned around and left. And that was before I’d even given the talk, while I was waiting for the whole thing to start. So I take it it was impactful, what I was going to give a talk about.

Your talk wasn’t necessarily emotional, but it made people emotional to hear it.

Oh, I was emotional, too!

How was it preparing for that?

It was very wonderful, because it summarized many years of my life. So, it was the completion of a circle, really, and the reaction that came with it was spectacular.

And the silence backstage was deadly. It was fabulous. I remember, after Kajsa stopped singing, I went off stage and there was a bunch of the volunteers standing backstage and there were so many hugs, so much positive feedback. You did me a great favor.

This year’s theme is the Edge of Brilliance, have you ever been on the edge of something?

Yes, and I said so in my speech too. I was clearly facing possible death, but it didn’t matter as it turned out. And that’s why Adam was right about bringing it in. 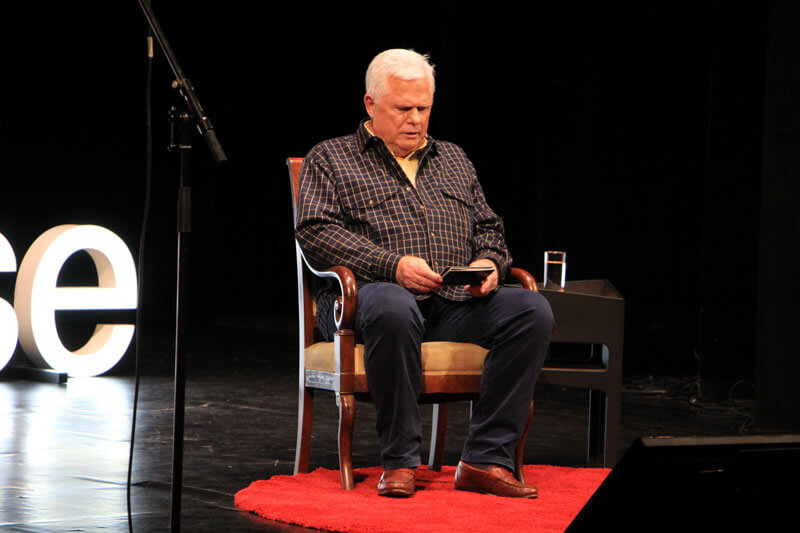 Since we last saw you, what have you been up to?

Playing hooky! I lived in California for 25 years before I moved back to Denmark. So I recently went to California for a month, which was wonderful because I have so many old friends there. Some of us know each other from the 60s, and we were on the streets together for all the marches, so we are still very close. We just remained a terrific nucleus.

What’s up next for you?

Possibly a trip to Ukraine to see things I haven’t seen yet! I want to see the architecture and the people.

Do you have any advice for the speakers this year?

I know that if at any point you are in doubt that your subject is interesting enough, then bare in mind that TED does not mess around with quality. You don’t get to stand on the red dot unless your talk has some value. So be secure in that.

Is there anything else you’d like to say while we’re still on the record?

There was another thing that was really an experience. You see, as I pointed out to Adam from the very beginning, I am not an actor and I have no compulsion to be standing on stage, but I said I will do this with as much heart in it as I can. And I was not going to do it more than once, it was a one-time affair. When I came to Odense for the dress rehearsal and the theatre was just swarming with people setting up, I sat there in the hall and thought, “I ain’t doin’ this. I’m just not.” Adam managed to calm me down and convince me I could do it.